My 3 y/o is already sick of the patriarchy

My family started playing the card game Citadels, which, briefly, is a card game where each player builds a city. Not as in building an actual house of cards (which is what I feared when we started). Rather each card is a different building (church, castle, market, etc.) and each player plays a card from their hand to build. 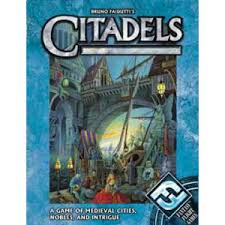 The trick is that each round you play as a different character, and each character has different “super powers.” One can knock down another’s buildings, another can steal your money. The game can be simplified for my 3 y/o or get quite cutthroat, like when I play with my 9 y/o.

Here is a sample of the characters you can choose from.

Notice anything? My daughter did. She didn’t want to play as a boy. She wanted to play as someone that more resembled her, and she had to choose from either the hunchback witch or the busty queen (they all look spooky, in the words of my 3 y/o, so I shouldn’t harp on their appearances. It’s not like in video games where it’s strong buff men in sensible apparel and one half-clad woman). And they are both good choices in terms of their super powers, but she wants to know why she has so few options. And I think this is in the expansion pack. When we first played, there were no female characters.

Of course she *can* pick a boy character. As this game is not actually played with your genitals, anyone can pick any character. But she feels she shouldn’t have to. She wants to have the same options her brother has–to be able to identify with the character.

I doubt that the ratio of male to female characters is an accurate reflection of the players of the game, so I’m wondering why the game designers decided to make so few female characters. And I know my daughter is not the only one to feel this way. I’ll bet there are some boys who don’t want to play as the witch or the queen because they don’t want to be seen as girls. They won’t ever have to. By making so few female characters, the game won’t force those boys outside their comfort zone to accept a character different from themselves to obtain a benefit. This hurts everyone, and game designers need to do better.

And I’m sorry for being so binary. I’m still learning about trans issues.

I'm a freelance writer living in Baltimore with my husband, son, and two cats. I'm working on editing my first novel. I love reading, traveling, and the cello.
View all posts by emmawolf →
This entry was posted in Feminist issues and tagged card games, citadels, feminism. Bookmark the permalink.