Earlier today or yesterday you tweeted this:

And I went nuts tweeting you back because I had a million things to say in response. And then I gave up and decide to just write it all here (and thus reopen my blog). Because while I think you are right, I’m also cleaning my house right now to get ready to move and I found this: 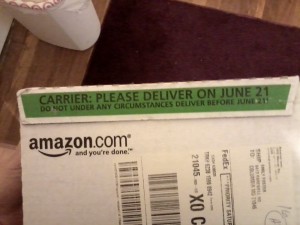 Do you know what this is, good sir? This is an Amazon package that I received just over 10 years ago. I still have it, unopened. Do you know what’s inside? This:

I’ve moved probably 10 times since June 21, 2003, so while I’m getting ready to move now, I’m unpacking old boxes and finding all sorts of other crap I didn’t know I had. Like a coconut painted black with gold puffy-paint lettering. Why do I have that? That’s a story for another time.

But this box is testament to 10 years after publication, I will still care about how quickly books I love came out. I wouldn’t have this package if the books came out quickly.

Ten years ago, I was working at a summer camp. I ordered the long-awaited Harry Potter book through Amazon and resigned myself to not being able to read it until camp was over. But a kind soul and fellow counselor bought the book for me. I was so touched.

At camp, everyone is usually dicks to each other. Not to be mean necessarily, but to try to be funny. Here’s an example: camp can be scary when we’re alone and it’s dark. There were all sorts of ghost stories about different spots in camp. We had one friend who was more scared than others. So, to be funny, we took one of her stuffed animals, ripped it open, inserted a walkie talkie, sewed it back up, then waited.

That night, as she was getting ready to go to sleep, we got on the other walkie talkie. We started calling her name and saying spooky things to her, trying to make her think her teddy bear was possessed.

I wouldn’t have this package now if it had not been for that wait. I wouldn’t have found it the other day and thought back to my camp friend who gave me the book. I wouldn’t have remembered reading it by flashlight after all my campers had gone to bed, fighting off the moths that were drawn to my light.

Waiting also gave me time to meet new friends. I read the first four Harry Potter books my in sophomore year of college, but the fifth didn’t come out until I graduated. I remember the fourth book ended with that gleam in Dumbledore’s eyes after Voldemort sliced open Harry’s arm. What the fuck was that gleam? I had to know, so I took to the internets! And met hundreds of other people who, like me, wanted to know more about that gleam and couldn’t wait for the next book. We spent the next two years hypothesizing and turning over every word Rowling wrote. Some of these people I still keep in touch with long after the last book was released and some of these people who I only met through Harry Potter I even call friends. If the books had come out quickly, I wouldn’t have had the need to find them.

So I care very much that I had to wait so long for the fifth Harry Potter book. It was worth it.

I'm a freelance writer living in Baltimore with my husband, son, and two cats. I'm working on editing my first novel. I love reading, traveling, and the cello.
View all posts by emmawolf →
This entry was posted in Uncategorized and tagged game of thrones, Harry Potter, reading. Bookmark the permalink.

2 Responses to An open letter to George RR Martin