With the exception of The Very Secret Diaries (which are actually very funny), Cassandra Clare. I owe my friend sj a huge apology. For some stupid reason, I thought it would be a good idea to read the City of Ass series by Ms. Clare. Oh yeah. It was because I found them at a salvage shop for a dollar next to Sarah Palin’s book. So I thought, what the hell and picked a few up. 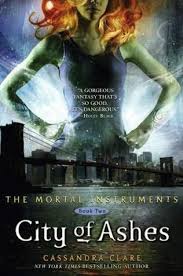 A friend of mine works in a high school. I donated them to her media center.

After a few paragraphs into the first book, I realized I had made a big mistake. My mind has thankfully blocked out the worst parts of the book, but I remember Ms. Clare referencing her own Very Secret Diaries in City of Bones and then laughing pretentiously at her vampires who lived in a place called Hotel Dumont with the “n” altered to make an “r.” She must have thought she was so clever. There was also a plot twist which was only a twist to people who had never seen Star Wars. So while I could take no more, sj soldiered on and read every book in this god awful series and blogged about them much to my amusement. I try to feel guilty, but I’m laughing too hard at Hasidic Edward Cullen.

I'm a freelance writer living in Baltimore with my husband, son, and two cats. I'm working on editing my first novel. I love reading, traveling, and the cello.
View all posts by emmawolf →
This entry was posted in 30 day book challenge and tagged 30 day book challenge, cassandra clare, reading. Bookmark the permalink.