I’ve been looking forward to this day for a long time because it allows me to squee about one of my new favorite books. 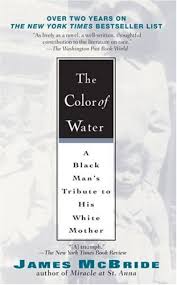 This book is amazing. McBride write his memoir along side his mother’s in alternating chapters. Here is a picture of them.

So Mrs. McBride was raised as an orthodox Jew. She grew up mostly in Virginia as an Other. Her father sounds like a world class asshole. Eventually, she found that the black community near her home was much more accepting of her than the white community. She marries a black man, founds a church, and has 12 kids. The title comes from her answer when her son asked her what color god is.

I cannot say enough amazing things about this book. I’m trying to stop myself from babbling like a school girl with a crush, so I’m just going to compare it to the Tiger Mom. The mother in this story raised 12 kids. That is not a typo. Twelve. From the tone of the book, it sounds like they were in poverty or pretty near to it. And all of them turned out to be pretty darn successful. Everything wasn’t roses, but she still sounds a hell of a lot nicer than the so-called Tiger Mom.

By contrast, the Tiger mom, well, she’s a fucking bitch. She raised 2 kids (TEN LESS THAN MRS. MCBRIDE), and it remains to be seen how successful they will be. (Yeah, good idea to write a memoir about parenting when you’re kids are still in school. It’s like walking out of the theater before the movie ends.) She also is wealthy and in a good school district. Not to mention the prejudice Mrs. McBride must have faced raising her kids that the so-called Tiger Mom couldn’t even dream of (not saying there isn’t prejudice against Asian Americans, but I wouldn’t think it would be comparable).

I love it so much, I would recommend this book to everyone.

I'm a freelance writer living in Baltimore with my husband, son, and two cats. I'm working on editing my first novel. I love reading, traveling, and the cello.
View all posts by emmawolf →
This entry was posted in 30 day book challenge and tagged 30 day book challenge, parenthood, parenting, race, reading, religion, the color of water, you're doing it right. Bookmark the permalink.