My husband and I laughed alongside Joe Biden the other night at the vice presidential debates. I also tweeted angrily and wanted to wipe Ryan’s smug smile off his face.

When the moderator got to abortion at the last seconds of the debates, I wanted to cheer when I heard Biden. Fuck yeah! I get that your religion informs how you live your life and make decisions. But I am overjoyed that he is smart enough to understand that can’t be the basis to rule a diverse nation.

Ryan’s story about calling his kid Bean, well, the New Yorker has a good take on it: “a bean is exactly what the photograph shows—a seed, a potential, a thing that might yet grow into something greater, just as a seed has the potential to become a tree. A bean is not a baby.”

I didn’t call my kid a bean when I saw him on the first ultrasound. In fact, I didn’t even feel anything. I knew I was supposed to feel some sort of maternal love and affection, but it was just a blob. I didn’t even know if it was a boy of a girl. If I felt anything, it was fear of the unknown.

This confession might make me sound like a horrible mom, but I know I’m not alone in this. When I first held my baby, I didn’t have that lovey dovey experience that you see in movies. I just kinda thought, well, now what? And I think the feeling was mutual. After less than a minute of being held by the person he was supposed to love and cherish, my new born baby pooped on me.

My major bonding happened with my child only after I decide to bottle feed. I really tried to breast feed, but, well, long story short, it didn’t work. So only a few days in, I held my baby and gave him a bottle. I looked down at his squished newborn face and thought he looked like a monkey. And with a bottle in his mouth, he looked like an adorable orphan monkey. 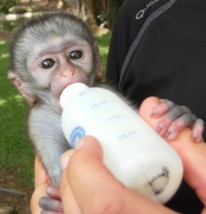 OMG! How can you not love that face!

And I thought about evolution and the moro reflex (which I also thought was adorable) and how we came from monkeys (not really). So I started calling him Monkey. I still call him Monkey. At about six months old, didn’t respond to his name, but he responded to Monkey.

So here’s my question for Congressman Ryan: because I nicknamed my kid Monkey, and apparently giving our kids’ nicknames can be a valid argument to support a political opinion, does that mean you accept evolution? No? You mean what I think shouldn’t have any bearing on how you live your life? Huh…

I'm a freelance writer living in Baltimore with my husband, son, and two cats. I'm working on editing my first novel. I love reading, traveling, and the cello.
View all posts by emmawolf →
This entry was posted in Feminist issues and tagged elephant in the womb, evolution, feminism, parenthood, paul ryan. Bookmark the permalink.

20 Responses to Beans and monkeys