This is tougher than yesterday’s prompt. Instead of telling you about the book I hate the most (how do I choose? Some books make me angry when I read them. Some I think are a complete waste of paper), I’m going to tell you about the books (because it’s a tie) that are least liked among my favorites. 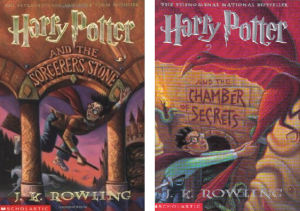 That’s right. I went there.

Before you flame me for saying these were my least favorite books, remember I just said that among my favorites, these are the ones that I like the least.

I almost put the series down after Chamber of Secrets because I thought it was just Harry Potter and More of the Same. I liked Dobby and the concept of the diary, but I thought Gilderoy Lockheart was so over the top and boring and frankly not believable. Yeah, I’m reading a book about people flying on broomsticks and people getting stoned Medusa-style, and I have a problem with a bad teacher.

Thankfully (for me), I continued with the series. Prisoner of Azkaban helped lift all of the Harry Potter series to my category of “favorites.” A corollary to the theory that the sequel is always worse than the original is that the third one seems to leave them all in the dust and be amazing. (The notable exceptions to my theory are Shrek, Star Wars, and Nicole Hamlett’s Grace Murphy series. In both of these, the second was my favorite and only wanted me to keep reading/watching.) I didn’t like Kushiel’s Chosen as much as Kushiel’s Dart. I didn’t have high expectations for Avatar, but it blew me away. Same with the Hunger Games (I know that’s an unpopular opinion). And I’ve heard the same is true with Game of Thrones, if I can only get through the second one.

I'm a freelance writer living in Baltimore with my husband, son, and two cats. I'm working on editing my first novel. I love reading, traveling, and the cello.
View all posts by emmawolf →
This entry was posted in 30 day book challenge and tagged 30 day book challenge, game of thrones, Harry Potter, Kushiel's Legacy, reading, star wars, the Hunger Games. Bookmark the permalink.